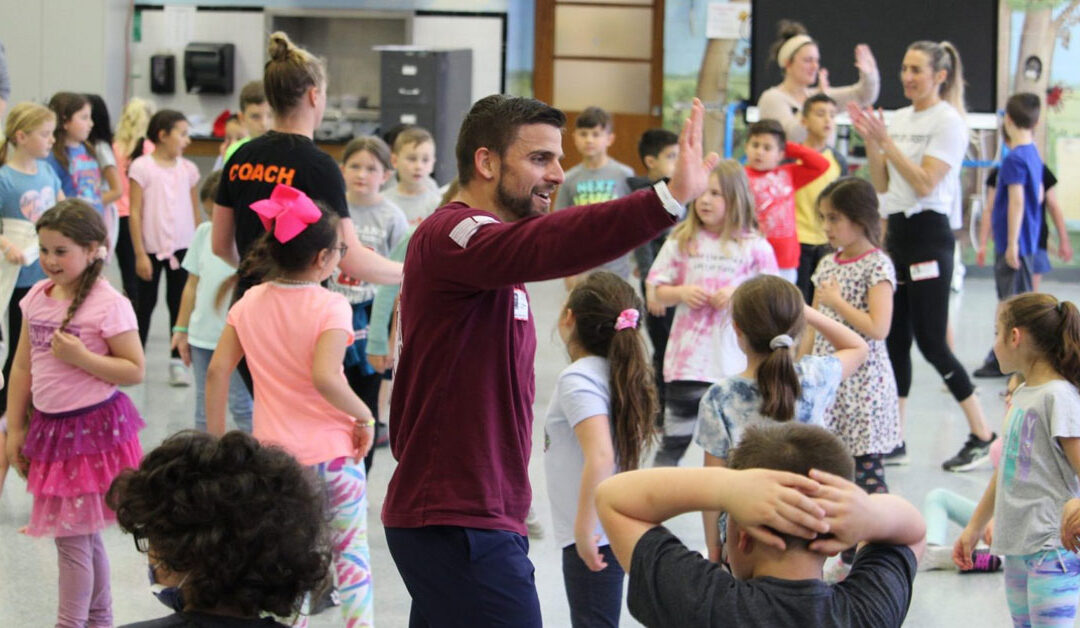 Keeping a group of 120 Kindergarteners under control is a big task–Trish Evangelista sure thought so. On the morning of May 9, the Long Island affiliate owner threw up with nervous energy, but took on the task, leading local youngsters through an amazing workout. Along with the rest of the Babylon CrossFit team, Evangelista brought CrossFit to over 300 NYC public school students for the very first time.

Evangelista, with a background coaching youth soccer, was a natural CrossFit Kids coach and says it’s how she originally fell in love with the sport. Now nearly ten years into CrossFit, Evangelista jumped at the chance to spread her passion for coaching. She said her fellow coaches recognized her love for coaching kids, many of whom share the same belief. Babylon CrossFit and Evangelista had already completed necessary background checks and other formalities, so scheduling and physically getting into the school wasn’t an issue.

The planning, however, was something Evangelista had to adapt from her regular classes to fit a larger-sized group.

“I wanted to make sure I made it fun, but also that they learned something, so when they went home, they could show their parents an air squat,” Evangelista said.

Each class, which was separated by grade and had 100-120 students each, started with a CrossFit warmup classic, Bring Sally Up. But instead of the Moby song, athletes did a burpee for each time they heard “happy” in the song Happy by Pharell Williams.

Then, the Babylon CrossFit team put kids through a series of movement progressions, which included an air squat, push press, “CrossFit plate jack,” and plank shoulder taps. After that, depending on the grade level, Evangelista and the class would go through a team WOD.

While Evangelista says she had a well-thought-out plan, equipped with backups and plan-Bs, there are always things that can go wrong with that many kids in the room. The first lesson learned? Bring a whistle, Evangelista said.

In addition, Evangelista said the wide range of personalities she would interact with within the assemblies worried her. With her regular CrossFit Kids classes at her home box, young athletes are often already connected to CrossFit via their parents. But with the assembly-style class, where kids weren’t signed up or necessarily willing participants, Evangelista kept inclusion at the top of her mind. Her top goal, she said, was to not have anybody crying in the corner.

Which she achieved! Evangelista counted the week in the classrooms an overwhelming success, and she immediately began seeking out other schools to teach in. A standout moment, Evangelista said, that made the entire week worth it, was getting a message from a friend with a video of a class participant showing her parents an air squat six days after the assembly. According to Evangelista, the fact that that kindergartner had had so much fun and took something away from a presentation nearly a week before was an amazing feat.

Another proud moment, Evangelista said, was teaching athletes the basics of CrossFit culture. Between warm-ups, skill learning, and workout sets, she would see kids giving each other high fives, congratulating each other, and being happy while exercising. It was invigorating for Evangelista, and she hopes to grow this idea to the greater CrossFit community.

“I just hope this becomes a thing,” Evangelista said. “As CrossFit coaches, we could really make an impact on children. It takes creativity and lots of time, but passionate coaches can really help make a difference.”

Read the original article on Morning Chalk Up.