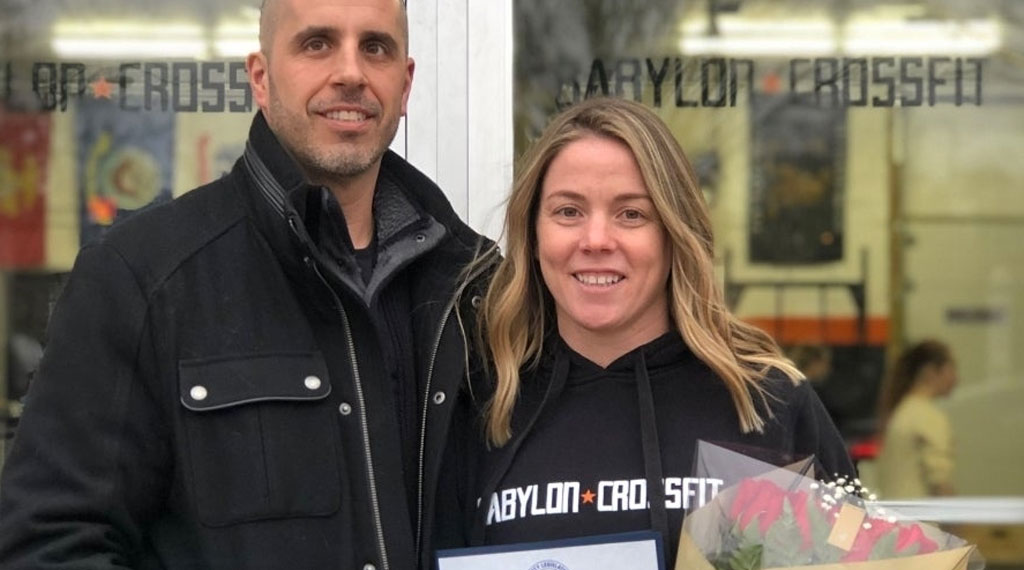 Babylon Patch asked Evangelista to tell us about her plans for the gym.

Where are you from?

I am a Long Islander through and through. Originally from Massapequa Park, I earned a degree in Business Management with a minor in Sports Management from Farmingdale State College where I played four years of competitive varsity soccer. I am now a Babylon resident and have been for the past two years with my husband Steven and my dog Roscoe. We fell in love with the community right away and are thrilled with our decision to live and now run a business in this tight-knit and welcoming town.

How did you get involved in CrossFit and how long have you been coaching?

After playing four years of competitive college soccer, I found myself struggling to keep up my fitness level. One day, I was on the soccer field coaching a youth team and one of the athlete’s parents suggested I try CrossFit. Like many others who try it for the first time, after the first class I was hooked. Six months later I made the decision to get certified as a Level 1 CrossFit trainer so I could start coaching CrossFit kids because I saw the important role it could play in giving them an opportunity to move for an hour, have fun, and develop relationships with other kids. Six years later, I now coach both kids and adults and have gone back to further my education and development by earning a CrossFit Level 2 Certification, CrossFit Kids Certificate, Olympic Weight Lifting Certification, Scaling for Crossfit Certification, as well as attending a highly intensive immersion course with CrossFit Games competitor, trainer and owner of highly-acclaimed CrossFit New England affiliate, Ben Bergeron.

Why did you choose to take over Babylon CrossFit?

I decided to take over Babylon CrossFit for a number of reasons. Firstly, because I believe in the CrossFit lifestyle and have seen the safe, effective exercise and sound nutrition positively affect so many lives and helped people accomplish so many goals. I knew by owning a gym of my own, I could help make positive changes for so many people. Secondly, and more importantly, I made my decision because I believe in the community in Babylon. I’ve worked out in gyms across the world and have met many members and gym owners. There is something very special about a group of people who commit to working out every morning together at 5am, or 9am or 8pm, almost religiously, and I knew that that level of commitment is only forged by one thing: a strong community who holds each other accountable and are there for each other for everything from a tough workout to times in need. Babylon is a very special place and this gym demonstrates that every day.

How will you improve or change the gym and the programming?

The first few months of owning the gym have been focused on getting my current members on a normal routine and schedule that works for them. I brought in five new amazingly talented coaches to join our staff immediately. We implemented consistent class structure including a guided warmup, workout review, mobility, and a workout. We also added new equipment including a bike, bands, dumbbells and more to accommodate our growing member base. Our boxes and benches were newly redone by the Farmingdale High School Technology Department.

We also recently completed bathroom renovations and by mid-February our kids room will be opening with a window for parents to see in and out of while they workout. I want to create a space that is functional for anyone, including parents with kids and eliminate any excuses people make to not workout, while also creating a culture of growth and camaraderie. I’m so excited for all that lies ahead for our amazing members and invite anyone and everyone to come down and try it out for themselves.